Howdy-do Geniuses, this just may be worth a read.

One of the things writers commonly ask me is, how do I create more compelling scenes? How do accomplish the elusive gold standard of “show but don’t tell”?

If you have written for any amount of time, you’ve probably been given feedback along those lines. For any number of reasons, the story feels weak. The prose is filled with soft spots. Maybe the characters come off as flat. Somewhere between inspiration and execution, the story lost some necessary life.

Writers receive these types of comments for any number of reasons. Sometimes it is because of a lack of clarity in a scene or the need for vivid color in a particular description. Other times it is a matter of repetition. One section of a manuscript too closely resembles another, or else it outright mimics it. But, in my experience, one reason tends to rise above the others: a lack of conflict.

Focusing your writing on a series of strongly rooted conflicts is the best way to elevate your storytelling. In bigger terms, these would be defined as the archetypal clashes of person versus person, person versus self, or person versus machine, just to name a few. When characters are at odds with something or someone, the stakes in the story naturally ramp up, and the quality of prose follows.

But the idea of conflict runs even deeper than the larger oppositional forces. Far more than simply clashes between characters, conflict needs to exist on a much smaller level.

What do I mean by that? Let me show you.

In a scene in a recent manuscript, my main character goes through the following actions: he arrives at a location and parks in a parking lot before going into a restaurant. It is a scene early in act two when the action in the overall story is just starting to ramp up.

Here are two different renderings of the same scene.

Joe slammed his car door. He squinted, shielding his face from the cold sideways rain. Bo-Rob’s appeared closed, dark windows an oddity for midday. Crossing the sidewalk, Joe stumbled over a curb. A trucker wearing a broken billed red cap glared at him as he bounded awkwardly up to the door.

What are you doing here?

The same thing happens in both renderings. Joe arrives on the scene. He parks and gets out of the car before going into his destination, which is, in this case, a fried-chicken shack.

It is a basic Point A to Point B sequence.

It goes without saying that the second writing is far deeper in terms of writing than the first. The prose in the second offers a deeper exploration of the moment merely by using considerably more detail. Diving a little deeper though, we can look at a few of the other reasons it works so well.

For one thing, Joe slams his car door. Slam is a strong verb that rings out off the page. This word immediately signals to the reader that a sense of urgency is contained at this moment.

The inclusion of sideways rain creates an obstacle for the character, which is compounded when he notices his destination, a popular restaurant, is curiously closed at the lunch hour.

We can feel that something is going on. But, deeper still, Joe stumbles while crossing the parking lot.

Going back to that ancient writing adage of show don’t tell, we see that Joe is clumsy, a key to the story. If I had merely written “Joe is clumsy,” the reader would understand that about his character. Merely understanding that, however, has less of an impact than feeling the character’s clumsiness as he loses his footing.

As the last layer, the red hat-wearing trucker glares at Joe as he arrives at the restaurant door. Now, I’m not spoiling anything by saying that the trucker does not have anything directly to do with Joe’s ultimate fate. By connecting Joe’s clumsiness to the trucker’s unnecessary warding glance, however, the main character’s ultimate fate is foreshadowed.

All of this subtext comes through what could be a throwaway scene.

This brings me to the idea that there are no real throwaway scenes in a well-written novel. With properly handled conflicts, even the smallest scene can illuminate a great deal about a character and the story’s greater situation.

This is not to say that every single scene needs to be written with such depth either. A book would become too weighty and overbearing if every walk to and from the car was so heavily accented. When you choose to bring a moment into the book, it is crucial to utilize it for its optimal depth and effect.

Creating conflict like this goes a long way toward keeping reader interest. It also achieves what editors are looking for in added depth and necessary layering.

In this scene, the primary conflict is not present (except to say that Joe is excited because he has unraveled something in the mystery) but the secondary conflict of character versus self (clumsiness) and environment (glare from the trucker) are in full force.

Moments like this keep readers reading. Seeds are carefully planted. They want to know what comes next not because you told them something, but because you made them feel something—and that is far more important.

Scenes accomplishing the bare story mechanics are effective, and your novel needs them. Sometimes a character needs to open the door, get out of the car, and cross the parking lot. But scenes that transcend that minimal standard elevate the reader’s experience exponentially.

Your characters must be engaged in a constant series of varied conflicts. While their main conflict comes in opposition to the larger story goal, that needs to be supported in many ways, with smaller, more seemingly ancillary clashes with everyday life.

Thoughts? Want to share a before and after (brief) passage to show how you ramped up the tension? 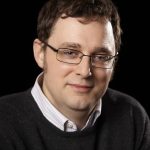 Erick Mertz is a writer and editor based in Portland, Oregon where he lives with his wife and son. He shares his thoughts about the world of publishing, writing, and the writer’s life at his website. Additionally, he writes “The Strange Air” series of paranormal mysteries. You can check out the first book in that series available on Amazon.