Hi-Ya Free Spirits, this is going to be decent.

Rumpelstiltskin spins straw into gold. An author employs an intriguing plot, captivating characters, and exquisite settings to spin a tale.

However, these ingredients, themselves, don’t guarantee a captivating tale. The author must induce the reader to hang on every single word (double drumbeat for emphasis) from that all-important title and opening line to the story’s conclusion. How? What additional pixie dust generates that literary magic?

The answer is twofold: 1) make each word count in conveying the story and 2) respect the reader’s time—present a memorable, enjoyable experience.

A foundational principle—for fiction and nonfiction—is leveraging available space and the reader’s time. I, too, am an avid reader, but lose interest when I can scan a few sentences on the page and skip the rest.

As with all communication, the first challenge is to hook the reader. The opening line, aka the first-impression sentence, is the bait. Here are some excellent examples that draw the reader into the story:

To further enthrall the reader, the author should infuse maximum meaning into minimal words. Stated otherwise, word sculpt your draft. Engage your imagination, please, as I explain that concept.

Poof! You are now a master sculptor standing in a sun-drenched studio. Chisel in hand, you examine a six-foot-tall block of marble, knowing precisely the image that lies within. Bit by bit, you chisel away excess marble until the envisioned figure emerges.

This same process occurs with word sculpting, but instead of chiseling a block of marble, you chisel your draft. Sentence by sentence, you identify and discard words that encumber your message. When completed, each remaining word pulls its weight.

Daniel Silva, renowned author in the espionage genre, is a master at this. Here are a few excerpts from his book The Heist:

To achieve such crisp, robust text, here are four word-sculpting tools that will help:

To exemplify, can you reduce this sentence to eight words? You’ll find the answer at the end of this article.

The reason that I’m writing this sentence is to provide you with an exercise in which it is possible for you to identify and discard each and every word that is useless.

Want a hint? Start with This is an ….

Verbs, another magic ingredient to spinning a tale. make your product sparkle. They can add pizzazz, depth, color, and excitement. Verbs mesmerize, delight, horrify, and amuse. Like stunt professionals and special effects in the movies, verbs make it happen. Use them; have fun.

Many authors shy away from simple verbs. Contrast keep to a minimum with minimize and place emphasis on with emphasize. To reinforce this key point, imagine a six-foot-tall hard-boiled egg … seriously, imagine one. Now, focus on the yolk—that is the verb. The white surrounding the yolk equates to blather in which authors encase the verb.

Authors of fiction should disfavor conventional, overly used verbs in favor of those that infuse feeling into the prose, as exemplified in the excerpts below, taken again from Daniel Silva’s The Heist:

Consider this sample that shows a progression from wordy to concise:

BEFORE: John got some coffee, sat at a table, and drank it all down. He got up, threw the empty cup away, and walked on. He didn’t go back to his car. He took an escalator down to the Metro. He was instantly surrounded by a horde of commuters scrambling to make trains. He wedged in with a group trying to board the train just entering the station. [66 words]

AFTER: John drank a coffee, discarded the cup, then departed the cafe. Rather than return to his car, he took an escalator to the Metro and wedged in with commuters scrambling to board the train. [34 words]

Contrast the above example with a longer extract of Mr. Silva’s writing. Each word is evocative; the reader savors the depicted scene:

Early that morning, Venice lost yet another skirmish in its ancient war with the sea. Flood waters carried marine creatures of every sort into the lobby of the Hotel Cipriani and inundated Harry’s Bar. Danish tourists went for a morning swim in the Piazza San Marco; tables and chairs from Café Florian bobbed against the steps of the basilica like debris from a sunken luxury liner. For once, pigeons were nowhere to be found. They fled the sunken city in search of dry land.

When you cut words down, you gain additional space to continue spinning that intriguing tale. Whether writing fiction or nonfiction, powerful writing often tips the balance between success and failure. 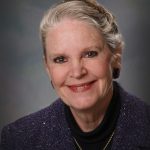 Carla D. Bass, Col., USAF (Ret.) is the author of the multiple award-winning book Write to Influence! Carla developed her writing methodology and taught thousands of Air Force personnel for fifteen years. She teaches workshops to government agencies, corporations, private businesses, NGOs, and academic audiences. Connect with Carla at her website. and on LinkedIn and Facebook.

Answer to the challenge: This is an exercise to discard useless words.

Was I on the nose?
You can thank me later.