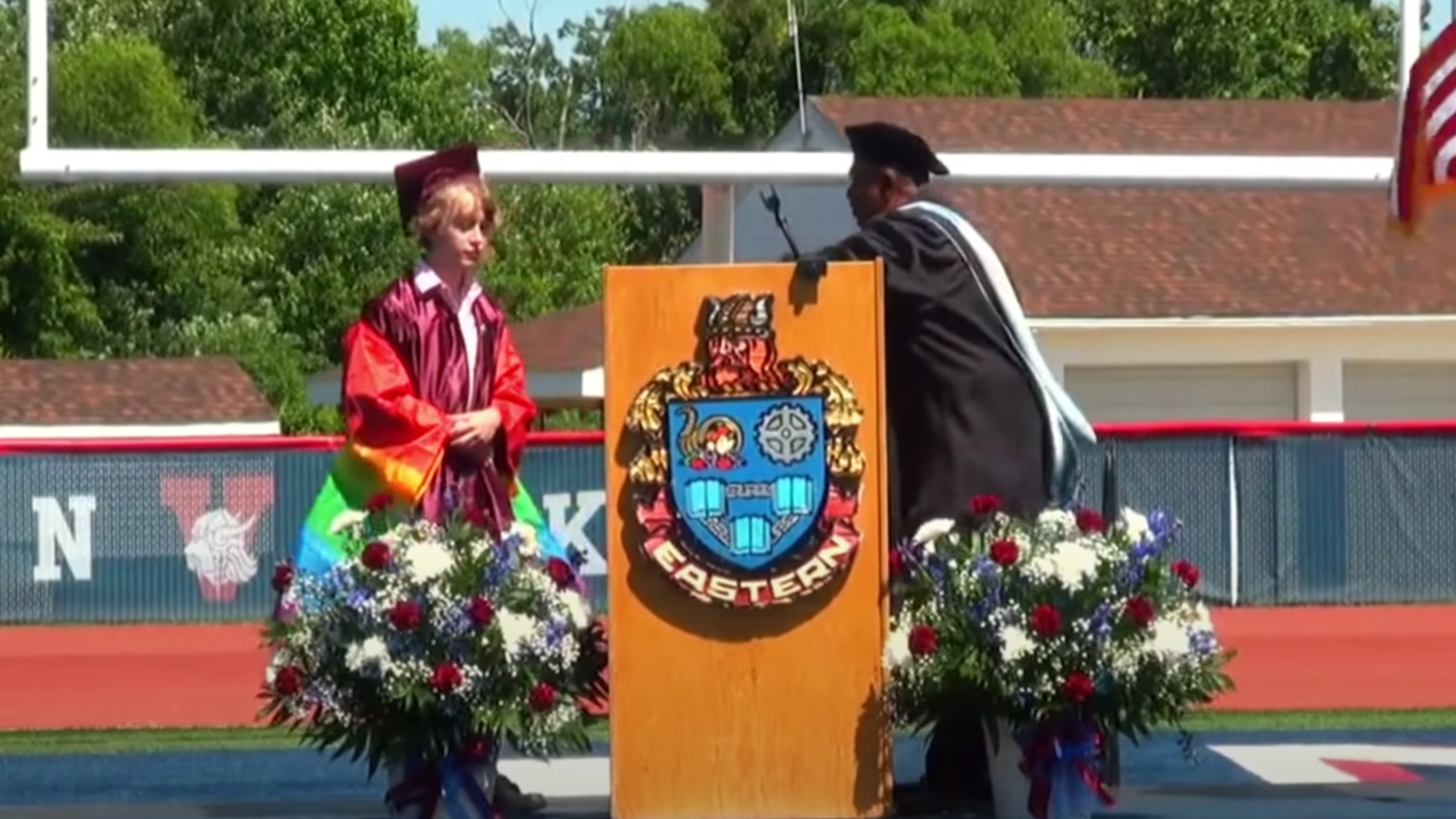 A high school valedictorian’s speech was cut short when he began speaking about his experience as an LGBTQ teenager and his mental health struggles. Despite protest from his principal and pressure to stick to a pre-approved speech, he continued anyway.

Bryce Dershem graduated from Eastern Regional High School in Voorhees, New Jersey, on June 17. The 18-year-old adorned his graduation robe with a rainbow flag, and his cap with the Black Lives Matter fist superimposed on the trans flag’s stripes. He hoped his valedictorian address would inspire his classmates, who had completed high school amid a devastating pandemic and difficult remote learning.

Dershem started the speech by thanking his parents, teachers, and classmates, before bringing up his personal struggle with mental health and acceptance.

“After I came out as queer [in] freshman year, I felt so alone. I didn’t know who to turn to,” Dershem began. Then his microphone cut off.

In a video of the speech his father posted on YouTube, Dershem pauses. The school’s principal Robert Tull approaches the podium to replace the microphone with a working one, and takes Dershem’s notes with him as he leaves. Tull gestures to the administration-approved speech before walking away from the podium.

Dershem told the Philadelphia Inquirer that Tull “crumped [the speech] up into a ball,” pointed to the approved speech, and said, “You read this, or nothing else.”

“At this point I’m about to cry,” Dershem told the Inquirer.

Dershem believes Tull and the school’s administrators intentionally cut off his microphone in an effort to censor him in favor of the approved speech, which did not mention his LGBTQ identity, recovery from anorexia, or discussion of mental health issues. Tull repeatedly pressured Dershem to rewrite his speech, and had him work with the school’s head of the English department, Dershem told the Washington Post.

“They started saying things like, ‘This speech is not my therapy session,'” he added in an interview with the Washington Post.

Dershem told the Philadelphia Inquirer that the school’s administration claimed any discussion of LGBTQ issues “would just exclude people.”

“I don’t think it is really exclusionary to say one is queer.”

“But that wasn’t my message at all, and I don’t think it is really exclusionary to say one is queer,” Dershem continued.

“As I was saying … After I came out as queer freshman year, I felt so alone,” he said. “I didn’t know who to turn to for support, for guidance, for a hug. Every day at school I outwardly smiled while inwardly questioning how we were supposed to link the different facets of our identities.”

“Every year, all student speakers are assisted in shaping the speech, and all student speeches — which are agreed upon and approved in advance — are kept in the binder on the podium for the principal to conduct the graduation ceremony,” Cloutier said in a statement to the Philadelphia Inquirer.

He added that the district “focused on social-emotional wellness for the year’s reopening plan” and is “committed to the diversity and inclusion initiatives” established by New Jersey’s Department of Education.

But Dershem believes Cloutier’s statement is disingenuous, and alleged that the administration specifically pressured him to remove references to being queer and recovering in mental health treatment.

“If that were true, would they have tried to censor me and play it off as a mic change?” Dershem asked in a rhetoric statement to the Philadelphia Inquirer. “If that were true, [Tull] wouldn’t have crumpled a speech I worked months on…in front of my face in front of an audience of 2,000 people.”

The use of valedictorian speeches as vehicles for social commentary is on the rise. Paxton Smith, Lake Highlands High School’s valedictorian in Dallas, Texas, gave a charged address on the importance of abortion access in wake of recent restrictions signed into law by Gov. Greg Abbot.

Dershem’s speech was met with support from his classmates, teachers, and even New Jersey Gov. Phil Murphy, who tweeted his encouragement for “speaking truth to power.”

Dershem said a teacher whose son died by suicide during the pandemic was especially touched by his speech.

“She hugged me and said that her son had passed away due to suicide over quarantine and my speech had just meant so much to her, and she really wished he had gotten to hear it, too,” Dershem told the Washington Post. “I thought, ‘This is the one person — this is the one person that I made feel less alone in that audience.’ That was everything for me.”