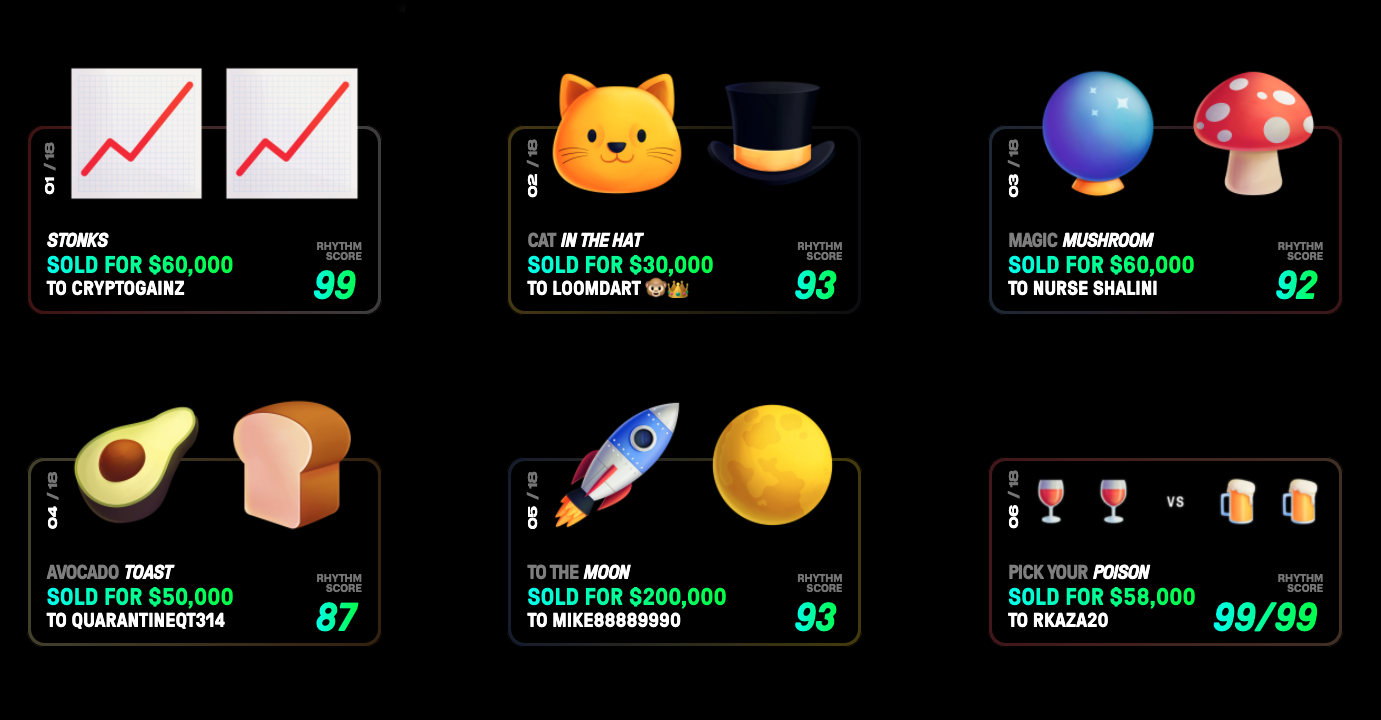 The emoji gold rush is on.

Scores of people are quietly paying tens of thousands of dollars to buy emoji, lured with the promise that they, and only they, will forever own the emoji in question.

Say hello to the hidden world of Yats, the latest online speculative craze. Built on the belief that the familiar cute icons will supplant traditional online handles, the currently invite-only Yat marketplace offers investors a chance to lock in their emoji of choice now — before it’s too late.

And if CryptoKitties and NFTs are any indication, the early adopters stand to make, or lose, a fortune.

On an extremely basic level, a Yat is just a string of emoji that, for the right price, can be yours.

“Imagine being known as 🔥🐍 or 🤖👻👑 instead of coffeequeen98 or [email protected],” explains the team behind the project. “By owning a Yat – let’s say 🌊🔱🌴 – it’s yours forever. You are the ~only~ one on earth who owns these emojis.”

Despite how absurd that sounds on its face — after all, how can only one person own an emoji? — people are scooping up Yats in droves. 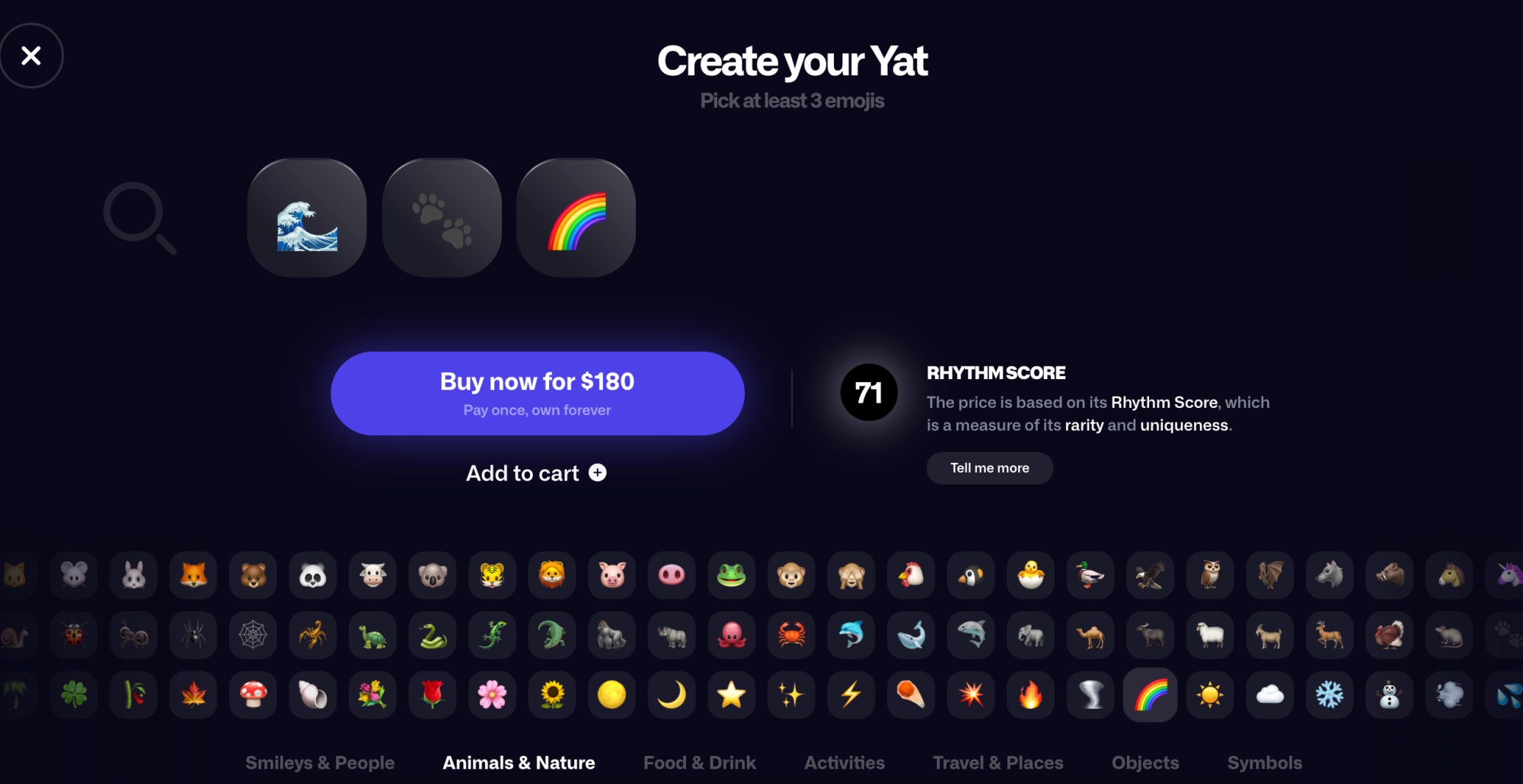 A nice day at the emoji beach.
Credit: screenshot / yat

Built by the blockchain protocol company Tari Labs, Yats represent an attempt to unify all your online handles — be they for communication, payments, or whatever else — in one carefully selected combination of emoji. With the goal of moving Yats onto the blockchain (more on that later), Yats offer, at least in theory, a censorship-resistant form of pseudonymous identity for the internet era.

Instead of sending bitcoin or monero to a long cryptocurrency address, the argument goes, you could send it to 🌊💨☁️💦.

At present, would-be Yat owners need an invite code to purchase the emoji. Tari Labs prices Yats based on when they were created (referred to as its Generation) and a hidden algorithm dubbed a Rhythm Score. At the time of this writing, all Yats are Generation Zero.

“The price is based on its Rhythm Score (RS), which is a measure of its rarity and uniqueness,” the Yat marketplace explains. “The RS is determined primarily by a Yat’s length. Other factors include the average popularity of the emojis used in the Yat (based on current worldwide usage) and the Yat’s pattern (i.e. repeating emojis or ‘bookend’ emojis).” 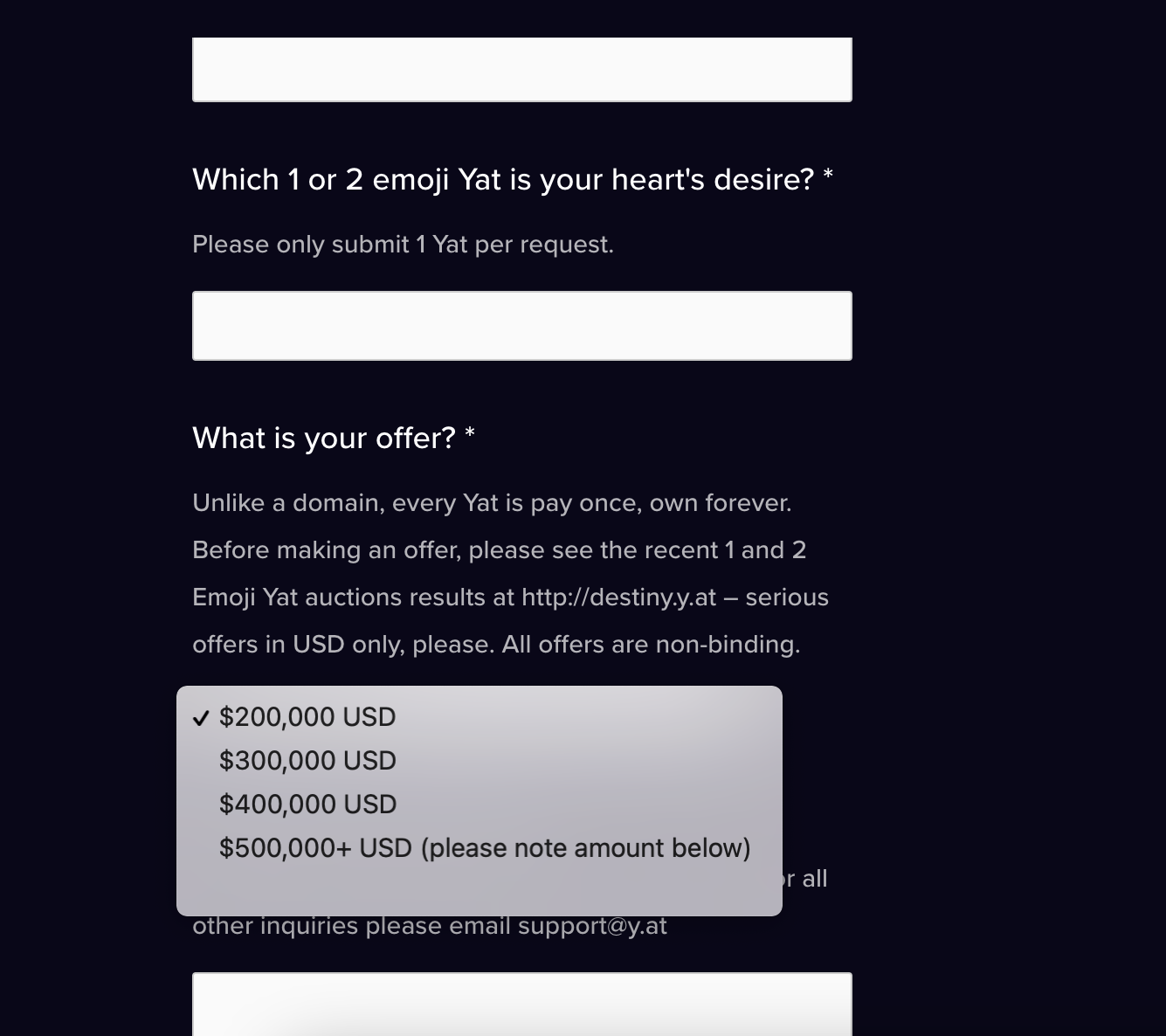 While the idea of throwing down $200,000 for a rocket and moon emoji (as one Yat owner supposedly did in an April closed auction) may sound like a joke, the team behind Yats is serious.

Cofounders Riccardo Spagni and Naveen Jain (who is not, in should be noted, the same Naveen Jain who ran the scandal-plagued InfoSpace) have a long list of cryptocurrency projects and investments behind them. Spagni is perhaps best known as the former lead maintainer of the privacy coin Monero, and is not the type of fly-by-night operator that has plagued the larger cryptocurrency industry for years.

A current job listing on Yat’s careers page shows the project is backed by numerous venture firms, including Blockchain Capital, which lists Tari Labs on its portfolio page. As a point of reference, Blockchain Capital’s other investments include Coinbase, Ripple, Diem, and Kraken — in other words, serious, if sometimes problematic, players.

And yes, this all has to do with the blockchain. Or, at least a blockchain. The current Alpha release of Yats is centralized, but Spagni has publicly claimed that the end goal is to move Yats onto the blockchain.

In other words, as things currently stand, if Tari Labs abandons Yats for any reason, Yats go with them. If Tari Labs can successfully decentralize Yats, however, then the project has the potential to live on regardless of what happens to the company.

This, according to Spagni, is very much in the works — though he declined to provide a specific timetable.

“No one should be able to be canceled by big tech companies, governments, or anyone else.”

“Yat will eventually live on Tari,” Spagni said via direct message, which is a “default-private digital asset protocol.”

Basically, Yats won’t live on the company’s servers, but be distributed on a blockchain.

We reached out Yat’s listed press contact with a host of questions, but the company did not respond. Spagni explained that the Yat team isn’t yet ready to speak to the press.

This future promise of decentralization via Tari is crucial, however, as it’s a fundamental part of Yat’s “censorship resistant” appeal.

“We believe that it’s critical for people to control their own identities, and that no one should be able to be canceled by big tech companies, governments, or anyone else,” explains Jain in a promotional video. “We believe that Yat is an important part of making this goal a reality.”

And maybe that’s true. But even so, it’s worth asking one key question: Can anyone actually even “own” emoji? Perhaps surprisingly, the answer is yes.

Companies like Apple own their own emoji set. On the other end of the spectrum are open-source emoji libraries. Yat has its own list of emoji. More broadly, however, emoji are governed by the Unicode Consortium, a non-profit funded by donations.

We reached out to the Unicode Consortium to ask what, if anything, it thought of Yat’s promise of owning emoji. We received no response.

Yat can only deliver on its grander promises if online service providers integrate with Yat’s API, thus tying those platforms to what is essentially a DNS for emoji. The web browser Opera has, according to Yat, already done this.

“Opera has 380 million users (!!) and now a huge percentage of them can simply enter Yat emojis into the URL bar to visit a Yat Page, or be redirected anywhere a Yat Creator chooses to send them,” explains Yat.

In other words, Yat owners haven’t exactly bought the emoji per se, but rather what is analogous to an emoji domain controlled by Yat. Yat does, however, make clear that a Yat is not limited to being a domain — again, it’s meant to represent an all-encompassing online identity.

That’s not all. There are also plans to permit the minting of Yats as NFTs — which would, at least in theory, turn emoji into non-fungible tokens on the Ethereum blockchain.

Technical questions aside, the reasons people give for buying up Yats vary as widely as the Yat combinations themselves.

We spoke with six Yat owners over digital chat and email — some of whom asked to remain anonymous or be referred to by their online handles — in order to about what Yats they’ve purchased, how much they’ve spent, and why they believe in the project.

The answers to the latter question range from financial speculation, to creative expression, to a true belief in the idea of emoji as a universal online identity (emoji don’t need to be translated, though emoji-based puns might).

“My bet in yats is very speculative,” explained one Yat owner, going by the name loomdart, who told Mashable they’d paid $55,000 for 🦋🐝 and $30,000 for 🐱🎩, “but I am speculating that this new take on identities will take off worldwide.”

Another Yat owner, who described himself over chat as a late forties Canadian man working in the video game industry, explained why Yats appealed to him.

“The idea of a single online identity that ‘just works’ feels a bit like the Holy Grail to me.”

The Canadian said he’d made around 500 different Yats — some of which were intended as gifts for family members — with the most expensive Yat in his collection costing approximately $900. In total, he estimated that he’s spent between $8,000 and $10,000 on Yats.

Another Yat owner, a 37-year-old man from Houston who claimed to own more than 150 Yats, explained what he sees as Yat’s potential.

“I work in B2B marketing and I’ve seen first hand how emoji has gone from a ‘we would never do emoji, it’s just silly’ to ‘let’s do a whole email subject in emoji’ in less than 18 months,” he wrote over direct message. “So I can see a future where CNN uses 📺📺📺 as their URL or Cirque du Soleil using 🎪.”

Another Yat owner, Matthew Callahan, described himself as a “Yatcolyte,” and wrote via email that he has more than 500 Yats — his favorite being ⭐⭐⭐⭐⭐.

“I plan on reselling many of my Yats in the future, but I would have a hard time selling ⭐️⭐️⭐️⭐️⭐️,” wrote Callahan, a 37-year-old living in New York City. “It’s my online identity, my brand — it’s really special to me.”

Beyond Yat’s ostensible use case, at least one artist, Skye Nicolas, is incorporating Yats into their work.

“This highly personal approach in intimately sharing my story, echoes the blockchain’s promise of transparency and openness, metaphorically,” Nicolas said of his Yat art series over email.

Perhaps surprisingly, when asked why they’d gotten into purchasing Yats, none of the Yat owners spoke exclusively in terms of pure market speculation. The man from Houston, for example, said he bought around 25 of his 150 or so Yats for “investment potential,” but that the ones he loved the most have much lower Rhythms Scores (i.e., are potentially less valuable).

Some version of this sentiment was echoed by all the Yats owners. Sure, getting rich would be nice, but it’s all about the big picture.

“I believe the true beauty lies in how this is all done on the blockchain, and the end user won’t even be aware of it,” wrote the owner of 🦋🐝 and 🐱🎩. “I view it as kind of like a gateway drug. If yats can pull it off, it’s giving users an uncensorable self-sovereign identity that they see as just some emojis!”

For Yats to be anything other than a brief online craze that leaves the relatively few early adopters bitter and broke, both average internet users and online services need to see value in the project.

Thankfully for Yat, it has some high-profile advocates.

The rapper Lil Wayne has a Yat in his Twitter profile, for example, as does Wiz Khalifa. 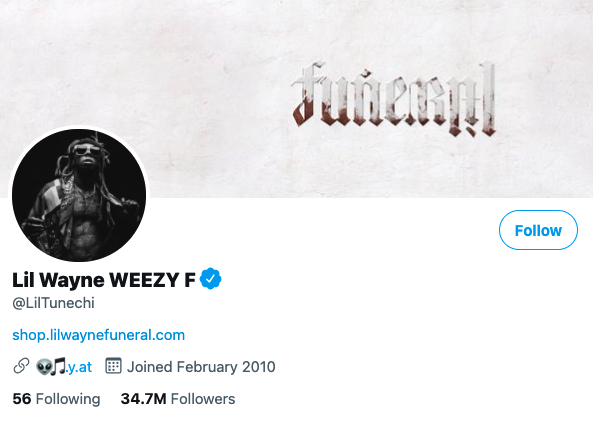 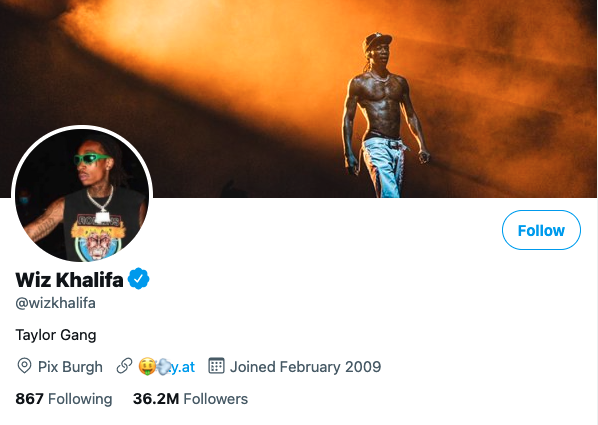 And on July 20, TechCrunch founder Michael Arrington tweeted about Yats — suggesting that he was the one who plopped down $200,000 for 🚀🌕. Indeed, that Yat links to Yat’s default landing page, which then points toward Arrington XRP Capital. Yat’s official Twitter account tweeted about the sale, tagging Arrington, back in May.

We reached out to Arrington XRP Capital in an attempt to confirm that Arrington really did spend $200,000 on 🚀🌕, but received no immediate response.

As of the time of this writing, the Yat marketplace is still invite only. It won’t remain so for long. Generation Zero ends July 30, and Yat promises that owners will be able to mint their Yats as NFTs by the end of the month.

SEE ALSO: So you spent millions on an NFT. Here’s what you actually bought.

In other words, get ready to hear a lot more about the internet’s Next Big Thing. Just be careful with the FOMO.